The 6 star hotel resort Soneva Kiri is located on Koh Kood, an island in the Gulf of Thailand.  Most prominent structure is the Kids Den, an activity and learning centre which will provide visiting children a wide range of entertaining activities as well as raise the level of ecological awareness with them. This Den provides an Auditorium/Cinema for films, lectures and plays, a library with books on permaculture and local traditions, an Art room, a Music room and Fashion room, thus giving children both creative and ecological education while playing.

The Kids Den is located at a rocky slope overlooking the bay. With its Manta-ray inspired bamboo dome, perched in an elevated position so as to offer magnificent views, it seems to launch itself into the bay. The structure and roof are made from local Thai bamboo, thus contributing further to the ecological approach of the resort. The interior is made from local plantation River Red Gum wood and rattan structural elements for the inner domes.

The design adopts all bioclimatic aspects to suits its humid tropical environment. The roof cantilevers up to 8m acting like a big umbrella providing shade and protection from the heavy rains. The open design with the translucent elevated rooftop and setback floors allow a natural airflow inside and the use of natural daylight, limiting the building’s energy consumption.

The design was created by Dutch firm 24H-architecture where Olav Bruin was involved as project architect and construction supervisor.

The building was built by team of bamboo specialists from the Karen hilltribe from the Maeh Chaem district in Chiang Mai, supervised by Olav Bruin in his former role as project architect of 24H-architecture. By having a mix of young and old, the bamboo knowledge could be passed on from the experienced older men to the younger generation for whom the construction was a learning school at the same time.

The main structure has been made using Pai Tong bamboo (Dendracolamus asper) in lengths up to 9m and a diameter of 10-13cm. The secondary roof- and ‘belly’ structure is made from Pai Liang bamboo (Bambusa multiplex) in 4m lengths and a diameter around 5cm. Both types of bamboo come from plantations in the neighboring Thai province of Prachinburi.

All beams have been generated from a 3D computer model. For making the curved beams, the individual bamboos have been heated 1 hour in a specially developed steam oven, after which they were assembled in an adjustable formwork with a coordinate system, forming each of the more than 70 individually curved beams.

The structure uses a mix of modern and traditional joining techniques. Due to the heavy loads in the 12m high and 28m wide structure, bolted joints were used for the main structure. At these joints, the bamboo has been filled with a cement injection to prevent the bamboo from splitting.

For the secondary roof- and belly-structure, bamboo dowels were mainly used in combination with rattan which was winded around the bamboo bundles. The roof consists of a ceiling of split bamboo with a waterproof membrane on top, covered with bamboo shingles. 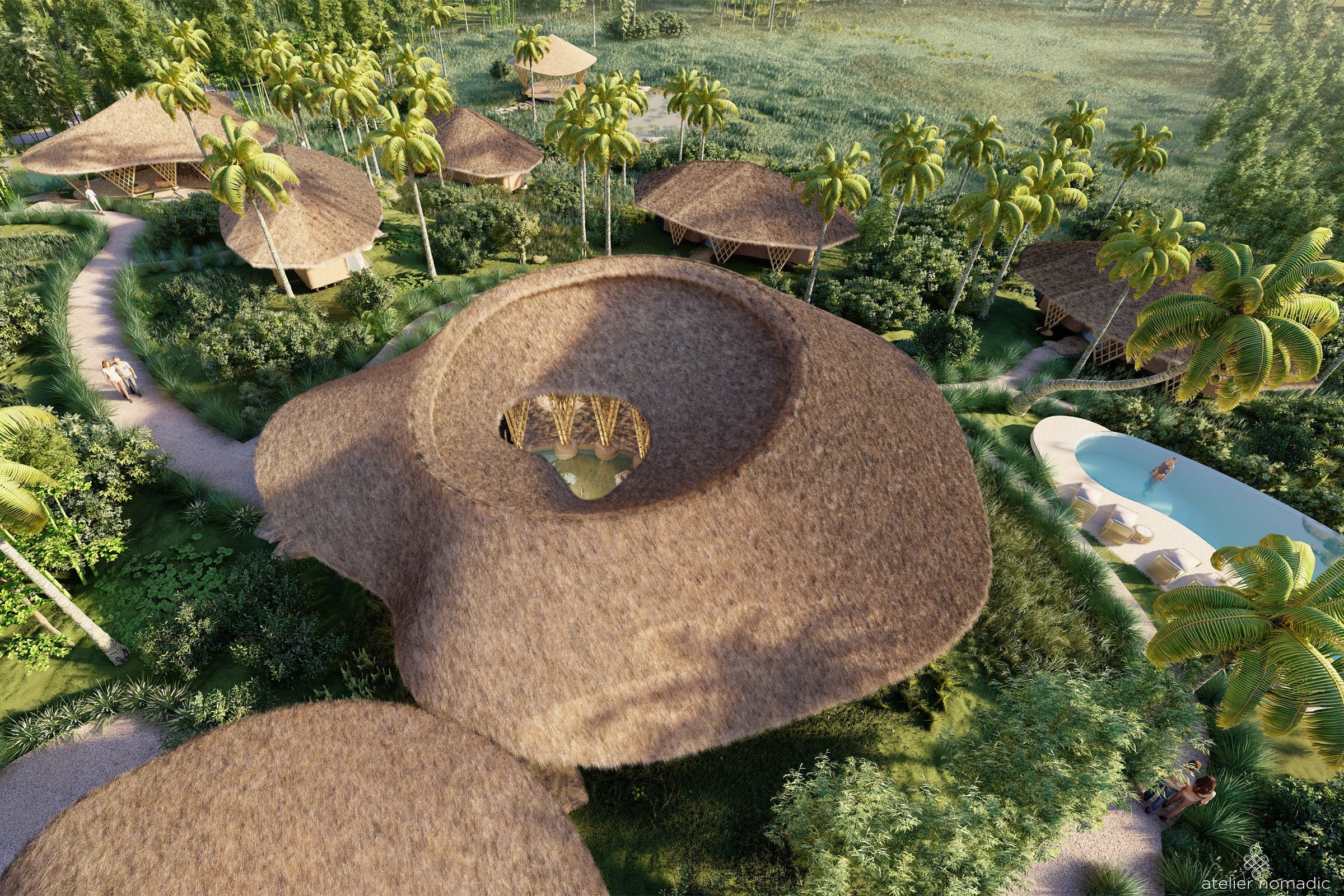 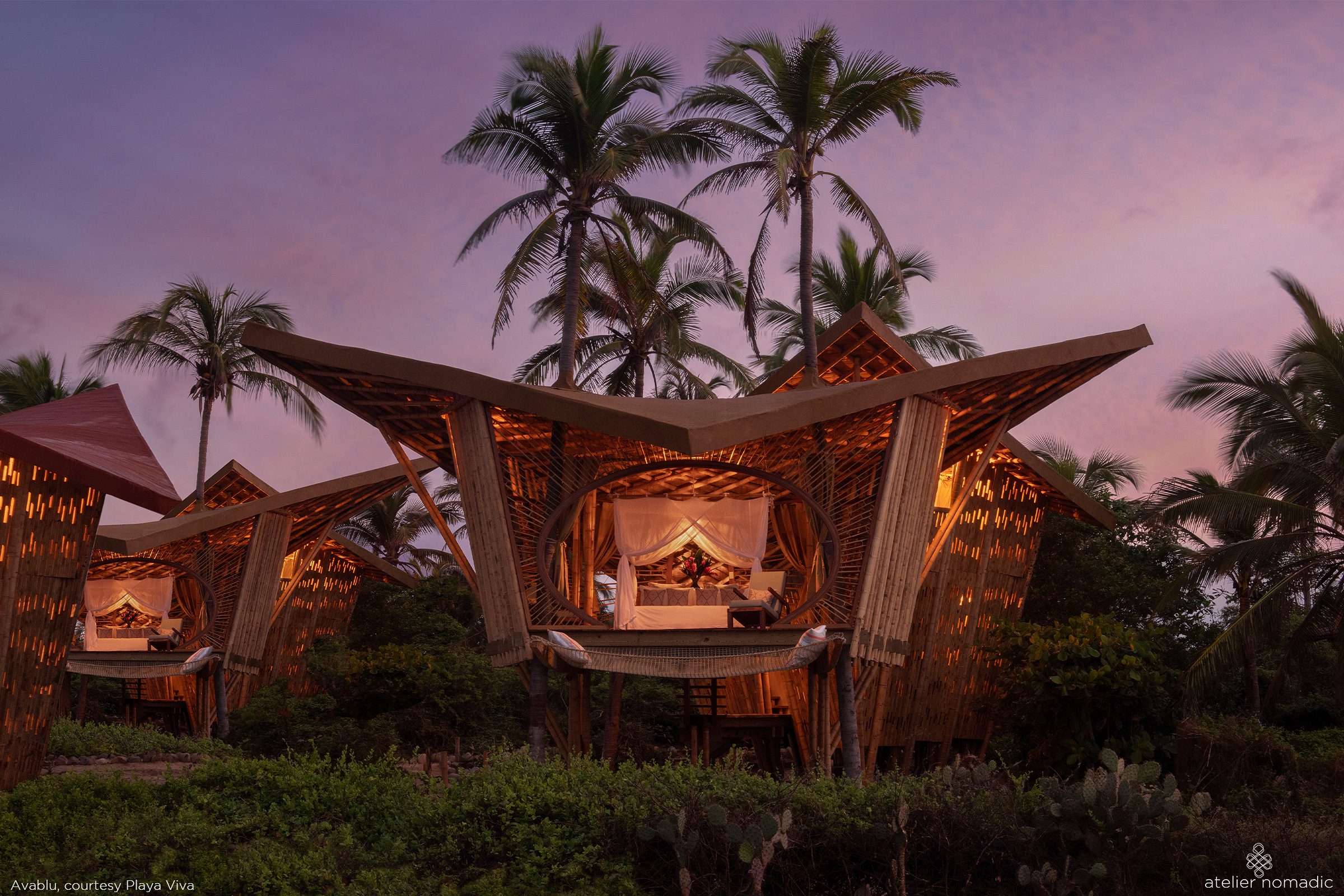